Why we built a self-provisioning runtime 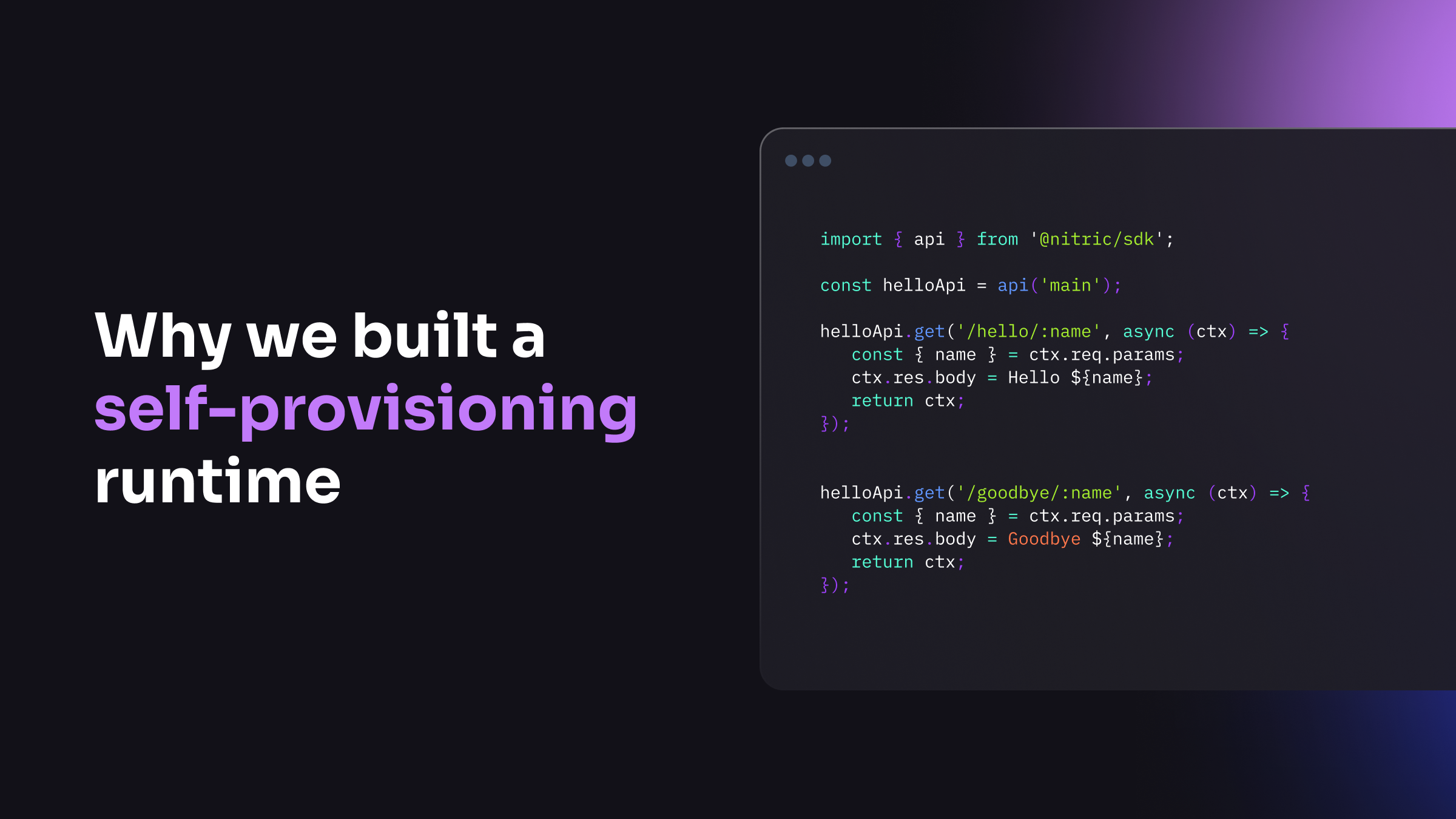 “Advancements in two fields — programming languages and cloud infrastructure — will converge in a single paradigm: where all resources required by a program will be automatically provisioned, and optimized, by the environment that runs it.” - Shawn Wang

The responsibilities of developers continue to expand; where they previously began and ended at writing application code, they now require in-depth knowledge of cloud application architecture, infrastructure, build and deployment, and more. As a result, developers have an increased need to communicate and collaborate with their operations counterparts. With these expanded responsibilities comes increased complexity, which slows down application development and worsens the developer experience.

In an effort to mitigate these downsides of the serverless era, cutting-edge teams are beginning to use self-provisioning runtimes. The idea behind a self-provisioning runtime is to solve for infrastructure, build and deployment challenges of modern development by automating easily repeatable activities including resource provisioning, granting permissions and configuring policies.

Basically, let developers focus on what they do best: writing application code.

The need for automation

In the past, when infrastructure requirements were relatively simple, development and operations teams could get away without automation. Applications were self-contained and ran on a single application server requiring minimal hardware configuration (e.g. CPU cores and scale was accomplished with server replication/load balancing).

Here is a highly simplified serverless architecture diagram for a product inventory API.

The application code is broken up into 3 separate functions – Create Product, File Upload, Get Product – each of which needs access to managed resources such as databases, buckets, and messaging. Shifting the responsibility of this functionality to the managed services allows developers to work with the latest and greatest, but now requires them to have intimate domain knowledge about how these services work, as well as work with an operations team to understand how to provision and manage these resources.

Instead of requiring development teams to have this in-depth knowledge of cloud services and continually repeating steps to build, deploy and provision infrastructure, automation can take over to free up both developers and operations time.

Automation may also be the key to bridging the communication gap between developers and operations.

In the world of DSLs, the link between code and infrastructure is made via names or resource identifiers (ARNs, etc). This is a brittle relationship as it does not clearly communicate how the application code intends to use the resource – e.g. will it read, write or delete items from a bucket – which makes it difficult for operations to write the correct YAML configuration for the application to run.

To resolve this, developer and operations teams must discuss the requirements for specific resources so that operations can provision and configure the right infrastructure, which becomes a time-consuming process prone to errors.

The outcome of these discussions is generally static YAML that then needs to be tested, debugged, and maintained over time. Here’s a Terraform example provisioning a simple API gateway, which is over 100 lines of code to manage. This looks and acts like code, but it’s missing many guardrails of software development including type safety, native auto-suggest (without DSL specific plugins), unit and integration testing and library/package support.

Instead of trying to find workarounds for verbose provisioning scripts, let's imagine that the applications themselves could dynamically communicate the needs of resources and the correct infrastructure could be generated automatically, without the manual steps teams take today.

Let’s take a look at how this works in practice.

Self-provisioning runtimes allow developers to clearly indicate their intended use of a resource, as in this code snippet:

From this code we can see that the intended use of our resources is clear. We have:

The Nitric framework encapsulates the domain knowledge required to infer resource details directly from the code and take care of the provisioning and deployment of all resources, policies, and permissions.

Not only does this automation reduce manual work, it also provides an unsung benefit by establishing a high level of consistency. Being able to trust that the infrastructure will be deployed predictably across all teams and projects is invaluable to managing security risks and staying on top of compliance and regulatory challenges. Without automation, this is a substantial challenge when development teams change, scale horizontally or face increased security requirements.

In 2021 I read another great blog post by Erik Bernhardsson, who challenged the community to push boundaries with his serverless wishlist, concluding with a simple pointed question: ‘Can you imagine a world without YAML?’

We’ve taken a giant leap forward in pursuing this vision with automation that eliminates the need for verbose YAML configuration describing infrastructure. As a result, we’re also eliminating the inevitable communication breakdowns between developers and operations that occur when it’s time to get your project live.

Here's what configuration looks like with Nitric. YAML configuration is limited to the basics, such as project name and target environment.

Nitric is an Open Source framework listed on the CNCF Serverless Landscape. It’s used by teams to simplify cloud-native development and deployment to AWS, GCP, and Azure. We’re actively developing and seeking feedback from the community to drive innovation.

Try out the Nitric framework and let us know what you think. We’re also opening up early access to our push-to-deploy platform based on the framework, which takes automation another step forward for the CI/CD pipeline. Sign up at deploy.nitric.io.